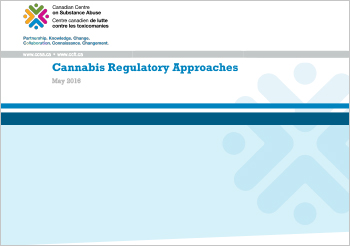 Publication date: 2016
Author: Canadian Centre on Substance Use and Addiction

This publication has been archived on the CCSA website and was current when it was published. It is available for reference or research purposes.

Summarizes approaches to cannabis regulation in a number of jurisdictions, including Australia, South Australia, the United Kingdom, Portugal, the Netherlands, Uruguay and several American states. A second table provides the regulation of cannabis in jurisdictions that have legalized it, including four American states, the District of Columbia and Uruguay. The report compares the advantages and concerns of these varying approaches along the continuum of legalization, decriminalization and criminalization.

All related news from CCSA

Exploring the Impacts of Cannabis Use during Pregnancy and While Breastfeeding